Well I finally tracked one of these down. My PPS K98, after solving a simple issue, is a great long distance rifle. At 450fps it is shooting usually farther than I can see without optics, one of the drawbacks about having to wear contacts when playing. I usually assume the shots drop off or go wide. A couple of game days ago I fired two aimed shots at people behind cover at least 70m away and scored two hits in succession so I know the K98 is zeroed nicely and firing consistently.


I have had aa different foray into fitting a scope to my K98 recently. I picked up a Chinese rail scope mount for mauser hunting rifles. Usually $30+ on eBay Amazon had it for Â£8. 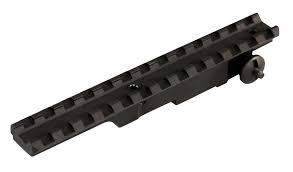 This replaces the rear sight with a raised rail for mounting standard scope rings or sights. Not the usual place for high power scopes as I will explain.
While this fitted well with no modification needed it does need a bit of disguising to keep to the look of a WW2 rifle. I wrapped mine in scrim cloth.
The biggest issue was the eye relief. For those unfamiliar with the term, eye relief is the distance your eye has to be from the end of the scope to see a clear image. Pistol scopes tend to have quite a long eye relief as they are designed to be held at arms length while rifle scopes are meant to be held close into the shoulder and close to the eye.
This caused a small problem as I could not get a clear picture without sticking my head forward and over the bolt. This was solved by moving both of the mounting rings forward of the zeroing dials of the scope. Period pictures of German snipers show just how far back the scopes tended to be with the majority of high power scopes being mounted direct to the action with claw mounts.

In the end I didn't end up using this mount as the scope I had was not zeroing properly.
All in though for Â£8 it is a nice alternative to pricier options and if you rarely use your k98 in a sniper configuration its a breeze to mount. -

A few weeks and a few games after removing this mount and going back to the iron sights I started looking into the other available optics for the K98, with even replica scopes starting at the Â£260 mark I decided that was out of the question. I also didn't fancy dropping Â£80 on claw mounts and having to tap, braze and grind the body of my PPS as I have no way of knowing if it'll withstand that sort of work.
My available options were the side rail mount only. With the two currently available options being the G&G 98K scope replica and the Viva arms ZF 41.

Now the G&G looks nothing like any period scope. It's essentially a pistol scope with fake wermacht markings painted on. The mounts are right but the scope is modern.

The Viva arms on the other hand is a quite accurate replica of a wartime ZF 41 scope with correct mounting rails.

Ordered from China the G&G comes in at the Â£60 mark, same as in the UK but there's the chance customs will want to whet their beak and extort you out of more cash if you order from abroad.
The Viva arms comes in at around Â£87 in China, or rather it did. Everywhere was out of stock, have been for a long time.

So I decided to go for the G&G figuring it would take a little bit of alteration before it would fit as its designed for the G&G 980 model of the K98.
Again stock problems. Nowhere in the UK had this in stock either! Although this was only a temporary restocking problem I had a look online and all the Chinese retailers were out too in til a new batch was produced. In my search though I did find a single retailer I'd never seen before offering the Viva arms ZF 41.

Quite pricey at Â£140 but as its long out of production I figured it'd be more expensive.
Now I've came across a few retailers in my time that never update their websites and list long out of production items as in stock only to disappoint the customers. A quick email to the company and I continued my wait for the G&G.
A few days later I received a nice email from that company stating they actually did have a few of the Viva arms in stock!
I ordered quickly and within about a week it came through EMS shipping.

Packaged in a sturdy cardboard box the scope was in a polythene ziplock bag in bubble wrap. The box looked like it had been sitting on a shelf for a while so I expect its old stock.
On first look the scope is great! Full metal, nice quality parts and a nice definite click when adjusting. Etched markings with white paint set in give it the right period look. I've yet to check if the body is all steel but the weight of it tells me it probably is.
A couple of little rough edges on the Mount but thats easily remedied.
Fitting wise it started to go onto the side rail mount but stuck after about 20mm. Dremel time!
A quick polish and sand and it was still sticking. I assume as this was made for the Tanaka by a 3rd party fit wouldn't be spot on and as the PPS is a clone of the Tanaka this has just made the fit even more unlikely. A good half hour filing, grinding and polishing the rail and mount has resulted in a better but still really tight fit that will do for now but could definitely be improved.

The eye relief on this scope is perfect. I was a bit worried that because of the small scope aperture and the low magnification (1.5) it would be hard to see the target but it looks great. Really clear and bright with nice crisp crosshairs without having to jam your face into the action of the rifle.
I've yet to fire and zero the scope so I may amend this review later with more info and some better pictures but as it stands just now -

Highly recommended if you can get your hands on one. But not a direct drop in solution. Be prepared to do a bit of fitting work.
oddball says -
A good spuding it's Welsh Sharia Law
Top

Very good review of a scope I didn't know existed. Would be keen to have a look in person next time I get down to POW.

Thanks! I'll be there on Sunday and hopefully every game day till the Christmas break, pop on over and have a look.
oddball says -
A good spuding it's Welsh Sharia Law
Top

I saw it on that page like more than 2 years Iâ€™ve always wanted it but it is really expensive + difficult for me to get it to my country and wasnâ€™t sure if that page was safe to buy from until I saw Tin from this forum had buy the scope for the springfield from them and I asked him about them.

I would like to see more about this, if you could post some more pictures and make a bigger review about it would be awesome never saw a review of the viva arms zf41

Thanks for posting this