Harry, bad luck mate - I hope you do get your money back.

Regarding reliable suppliers: Dog Green 1 (on this forum) will be supplying tunics, trousers, shirts, caps and helmets at a very competitvie price - watch this space.

I've also spoken to Richard Underwood, who can supply webbing belts and Y-straps, and other bits like mag pouches, tan breadbags, etc. (He also can supply tunics, trousers, shorts, caps, etc, for a bit more than DG1.)

For myself, I am sticking with the mag pouches I've got - DAK used the black leather K98 pouches, and I'm quite happy with my old green MP40 pouches, should I choose to use them. The so-called "tropical" water bottle was in fact issued everywhere as a metal-saving initiative (and would have been seen quite commonly on the eastern front as well), but "normal" water bottles were just as common in north Africa. I'm also not bothering with a tan breadbag either. Webbing e-tool covers almost certainly did not exist, but are still sold on ebay. Not sure about bayonet frogs - Lardy ?

BedsnHerts
Fought at the Battle of Agincourt 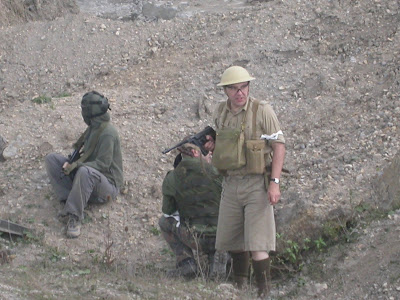 Oh no! Not the Scary Scoutmaster loadout

Lardassmonkey
Fought at the Battle of Agincourt

Not sure about bayonet frogs - Lardy ?

Bayonet Frogs can be leather or web. Your choice really.

Ah ok, so web ones did exist. Probably won't bother, myself.

all i want to get is the tunic and trousers plus tan mag pouches and boots and get another cheap helmet
i dont really want to get any more than that, my canister is in a brown colour so that a bonus
so would that be enough?

I would say so, Marsha - in fact, I wouldn't even bother with tan pouches if you already have some green ones. Nice to have, but not essential.

I think it's fair to say that tropical equipment isn't really necessary to do DAK unless there's an item that you really want in your collection. I think the waist belts were very common, so would be a good idea, but everything else was very hit and miss. Temperate issue equipment is in all the photos and splinter zelts were used in very large numbers. A memoir I read by a member of Sonderbervand 288 said the only piece of German uniform he had by the end of the campaign was his cap - everything else was a mixture of Italian and British!
Tropical MP40 pouches had webbing fittings instead of leather, so if you haven't got these, any colour should be fine.
A good piece of kit to get is the cheche (not to be confused with the arab shemag) - the north african head scarf - you can also wrap it round you face for some rudimentary BB protection!
I tried painting my M35 stahlhelm with sand coloured emulsion - very stubborn to get off! It might be better to use artists acrylics if you want a tempory paint job. These tend to flake off metal after a while so should be easier to remove. Disclaimer - don't blame me if it's a swine to remove if you try it

right I recieved yesterday, a most useful book, Rommels army in Africa by Dal McGuirk. as previously said supply was a massive issue and it wasn't uncommon to see continetal shoulder boards on tropical kit. What was very interesting was the lack of white waffenfarbe. White was used for army flak troops. Most for the waffenfarbe colours were jager green or cavalary yellow, but with supply being sporadic at best and the constant switching of troops between units, it became impossible to identify specific units just from colour. Boots were another issue, many for the Afrika Korps used there regular infantry boot, so a mix of trpical and continetal was not uncommon. the hhigh boots were hated as they were difficult to lace up. british and captured american were also worn. the famous Afrika Korp cufftitle was the only offical title worn, right up until 1943. the Afrika title was actualy an award and never saw usage in North Africa. It was only issued in 1943. from late 42 a simplified DAK jacket was worn,this had no pocket pleats, an economy mesure. Long trousers for combat to prevent infection. Tropical field caps can be seen without the soutach, but either is correct. Oh the very light blue waffenfarbe was never worn by combat troops, a similar style was worn by sonderfuhrers who acted as interperters. Tropical shirts varied from olive to khaki. and for those who don't want to paint their stalhelm, burlap was used to camo them. (mostly by pioneers)
Now if you want an interesting unit try Sonderverband 288, for uniform standard DAK kit, jager green waffenfarbe, and the 288 badge worn on right sleeve above elbow. the 90th light infantry also wore light green waffenfarbe but copper brown, yellow and lemon yellow can be seen. so there you go. DAK scruffy and lovin it

Ey!
If we are doing 1943 then don't forget Ramcke Brigade (FJ) and Regiment Herman Hoering er - I mean Goering!

Cufftitles
Prior to the introduction of the official formation cufftitle in July 1941, unofficial privately made examples were already circulating. These were in black cloth with the legend "Afrika-korps" machine embroidered in sliver grey thread block letters. This style can be encountered both with and without edging.
The official cufftitle was machine woven on a tan cloth band with a dark green central strip and aluminium weave bordering. The legend AFRIKAKORPS in block letters was also executed in silver metallic weave.

There's more but it gets boring - Also the Luftwaffe had their own plain dark blue band with the word AFRIKA in silver grey block letters. And the Kreigsmarine (yep, there were there too!) had a dark blue band but with yellow letters spelling AFRIKA,

When sourcing this kit - remember the tunic was a four pocket (pleated pockets) OPEN NECKED tunic in olive - but it varied from Chocolate Brown through several shades ranging from sage green to olive - It also bleached into that famous George Peppard shade....... DAK caps had a lovely red interior rayon lining and the most commonly worn item of footwear was the leather and canvas boot both high and short legged....... with, as Gadge says, puttees or gamaschen (gaiters) As already metnioned - uniform items were liberated from over run stores - so LOTS of British Items to be seen - Occupied France, having large colonial garrisons had stocks of tropical uniform items which the GErmans made good use of - Shirts, as said, and pantalons especially a baggy breeches type trouser which were hastily dyed olive from sand....... Topis (pith helmets) were rapidly discarded and by the time of Kasserine would not have been seen they were deemed impractical and the ubiquitous "DAK hat" was the most common soft headgear - inf act it was a badge of honour and a status symbol - the more faded and sweat stained it was the more of an Alte Haase you were taken to be. Steel helmets were painted DunkelGelb as well as Olive and often sand was mixed in with locally painted items. Equipment was more frequently webbing as the leather didn't stand up well to the heat and sweat (stitching tended to rot despite being heavily waxed) Water bottles were predominantly the Phenol resin type and were half a litre larger than standard bottles - but don't let all this bother you...... standard equipment was used latterly due to replacements and supply difficulties (Damn those Sunderlands!)

Out of interest did you know there was an SS Einzatsgruppen operating in North Afrika? Einzatsgruppen Tunis - Look it up (lovely opportunity to legitimately wear an SD Raute and drill the old kriegsgefangners!!!!


Soldier of Fortune ahd some stocks of good DAK uniforms - He still appears to have a selection of DAK equipment and also some uniform items (see tropical tunic). Here is an indication of the colour from his piccies

Not cheap but I reccomend going to the stall at a fair and doing a deal - or contacting Pete direct and getting a bulk buy.

Hope this helps - I'm contemplating this one as it's not a million miles away - I'd go as a driver if Mister Barret needs one - That would give someone the opportunity to play - Leave the old fatties to be taxi drivers. (and guard the dates, palm wine and coconuts)

All good stuff there PD. a tad worring about the Einzatsgruppen, I was always under the impression that no SS units were in Africa. Have to admit getting kinda interested in doing an Afrika Korp field police kit.

Right after a bit of googling, I found what you mean, that group was formed but never got to Africa, Phew. to quote indy "Nazi's I hate those guys"

Lardassmonkey
Fought at the Battle of Agincourt

I thought that some did actually make it to Tunisia. There are records of Jews being rounded up but I'm not sure who was responsible. Nothing like on the scale of elsewhere though.

Heer only for this PD, no LW. Bits of LW kit, along with French, Italian and British are all fine though. We want to represent a single, all be it very scruffy, unit.

Not wishing to go (too far) off topic - Einzatsgruppen Tunis were deployed in North Africa and were commanded by Walter Rauff - look him up!!!!!!!

Yeah - the kit is obtainable - Will look nice in the sand pit - I'd advise against shorts though...... the welts are bad enough through BDUs and Wolle so bare legs!!!!! - I should think it would result in a lovely hoppy dance type jig!!!!

hehe, yith survived in his british KD shorts, mind you they almost meet up with the socks