Forums
ARCHIVE OF PAST GAM...
2018 events
The Battle for Cerv...
Thanks guys

Great day we had a top time. Snow was an added bonus. Thanks to everyone who had a hand in organising the day, great job.
It’s always great to go to other sites and enjoy the game without worrying about organising.
Top job lads, we will be back.
Tony

was just typing a post so will just add here lol

HAving got warmth and pizza I can type lool

BIG THANKS to all those that made it today, I hope everyone got back safely

I am shattered, but had a great time, many thanks for everyone getting into it, and keep going in the rain then snow

it really does help

add any photos you got

Brilliant day, some nice touches from organisers. A lot of effort put in, well done. Snow was awesome, loved it. See you guys soon

Thanks Chris, Martin and the fireball guys for another great day. Super impressed you guys managed to get it to snow. Thanks to the other Brits too for some good game play and top notch banter all day.

Special thanks to Jay for lending me his windproof, I think I would've been soaked right through without it.

P. S. Sorry Chris for my shit writing on the mission notes. My hands started to fail me lol

Thanks to the organisers. Awesome day. Thank you.

Great day. Thank you Chris, Martin and the 34th.
Highlight for me of the day was (besides the snow) the attack on the border post with only grenades and pistols. We needed intel hidden in the tower and some US squad wanted to defend the tower for whatever reason. After the defending fire had clamed down, I stormed forward in clouds of smoke. I managed to surprise 2-3 Americans bandaging each other. Taking them out. There were two more on the road behind which I thought were moving back to their regen being dead. So I asked just to make sure, if they are dead. The reply was: "no, but you are now" and a burst of fire hit me.

Thanks very much to Martin and Chris, I can't imagine how much work went into the individual post, and arranging the snow was just brilliant!

Hats off to my British colleagues, nice and toasty in our wool uniforms. After getting wiped out twice we worked out that our best Tactical approach was to hide as much as possible, the high point being half the German army walking right past us six feet away making as much noise as a herd of Elephants. Walking along behind them while they all looked the wrong way was quite funny too.

Thanks and looking forward to the next one.

-- attachment is not available --

What’s Ed doing with that sack?

Good day all in all once we got our collective fingers out lol!

Thanks to all involved.

What’s Ed doing with that sack?

a teaser photo from yesterday, can't wait to see the rest

when they get chance to be done by the super

-- attachment is not available --

Great day. Thank you Chris, Martin and the 34th.
Highlight for me of the day was (besides the snow) the attack on the border post with only grenades and pistols. We needed intel hidden in the tower and some US squad wanted to defend the tower for whatever reason. After the defending fire had clamed down, I stormed forward in clouds of smoke. I managed to surprise 2-3 Americans bandaging each other. Taking them out. There were two more on the road behind which I thought were moving back to their regen being dead. So I asked just to make sure, if they are dead. The reply was: "no, but you are now" and a burst of fire hit me.

that was a funny scrap, grenades going all over the place from both sides, including me popping out from behind the tower to throw one seeing a German and panicked and threw it very very camp

no idea why I did that as was only a smoke lol , no idea who shot you but most of us were dead further up the path watching, did see you take out the ones behind the tower though

before a lot of us died there was 4/5 of us behind the tower sharing the 1 striker that was not damp trying to light our grenades off it and not get shot, to be fair it never went well

Thanks to Chris .... well... for everything! So much time and effort and personal touches.

Thanks to everyone for getting into the spirit of the game and keeping spirits high despite the cold and wet.

These games are great to host (not sure if Chris would agree, heh) as they encompass what airsoft is all about. Running around in the woods, having fun, playing soldiers. No need for marshals or staff once the game starts, just honest fun.

And special thanks to the rest of Zug one! (Except for my own team mates, Matt & Badger who both killed me with ‘friendly’ fire in true 34th style)

The weather certainly made for a memorable day. I think we were all soaked before the game started, then came the sleet and then the snow. The change in sound was something that struck me, from the constant patter from the rain, through to the almost absolute silence in the snow. Incredibly atmospheric.

Our day went rather well, though I am not sure how many missions we completed. All that we started were completed in true Gebirgsjager style and we always got back to base alive. While our first few missions started with either no or minor contact, later in the day we had some very intense full on scraps. I loved the two stage mission for Himmler, where we captured a letter that then detailed the location of a special item. This led to the attack on the border tower. We were only armed with a few pistols and a couple of grenades yet managed to take the tower so that Lutz could rush in and grab the brief case. Russel and I had been injured in the attack and got to watch the rest of our zug complete the mission and start to head back to base.... without us.

We seemed to do rather well at sneaking up on the enemy, often taking them completely by surprise. And although we were not heavily armed, we made up for this with some accurate fire and well coordinated attacks/ambushes.

The combined mission to provide support for zug 2 in their rescue of a downed pilot was brilliant. We took out an entire squad of the enemy without zug 2 needing to fire a shot, allowing unhindered access to the prison and the snow covered prisoner.

Unfortunately, my ageing back started to protest in the afternoon and I had to step out of the game.
(Only then did I start to feel cold). But I would love to fight alongside Mattywheels, Thechef, Lutz, Badger and Matt again. Hopefully soon.

I took a few sneaky pictures with my phone. I tried to take more, but the phone would not recognise my frozen thumbprint and locked me out. 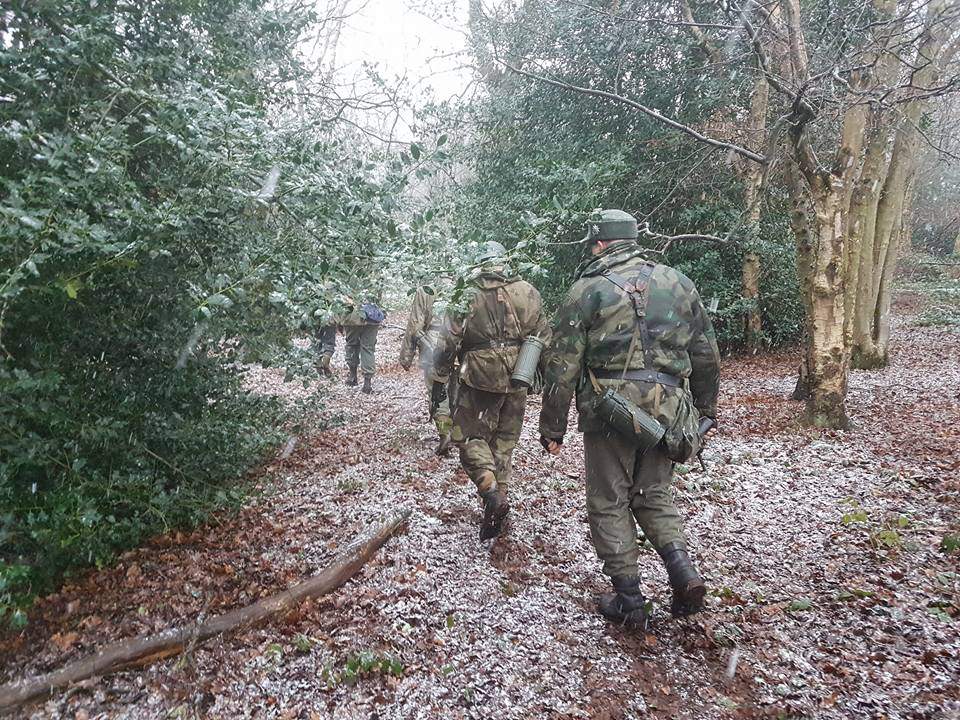 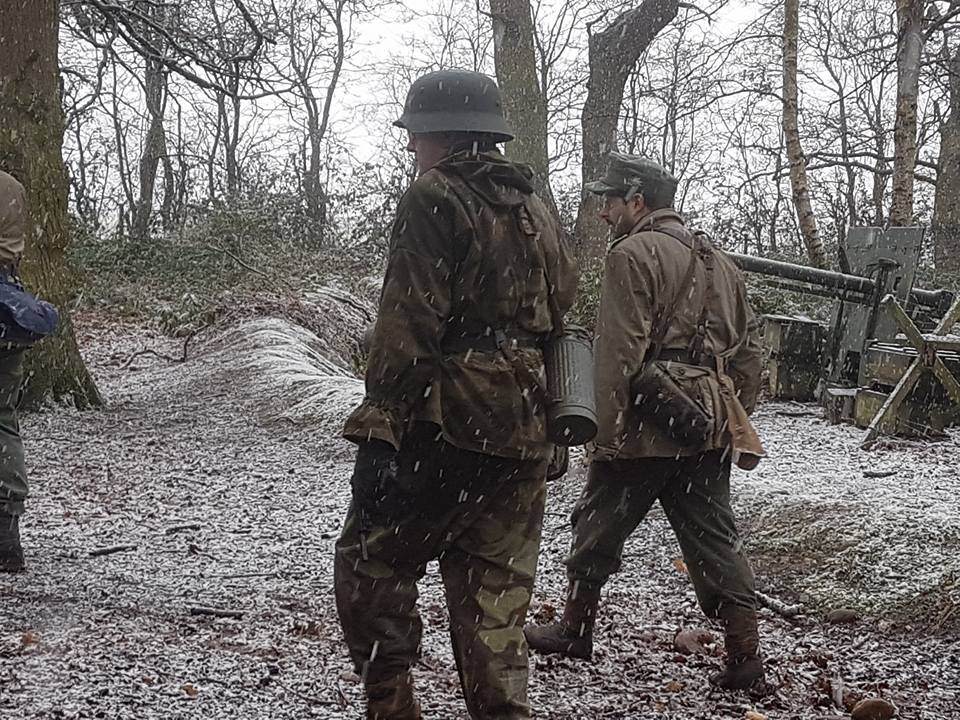 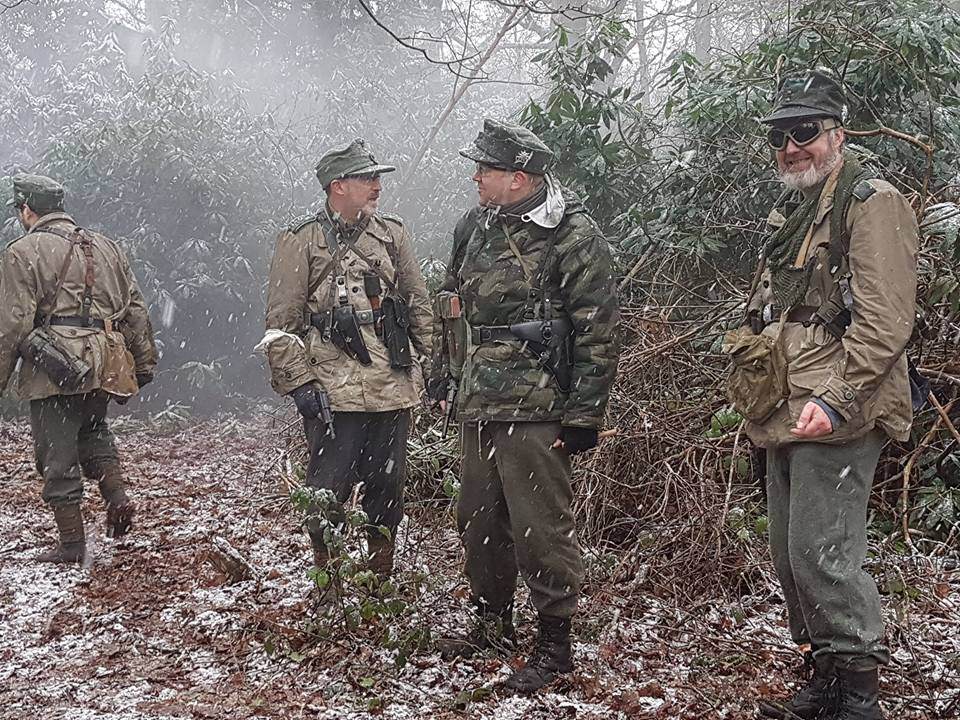 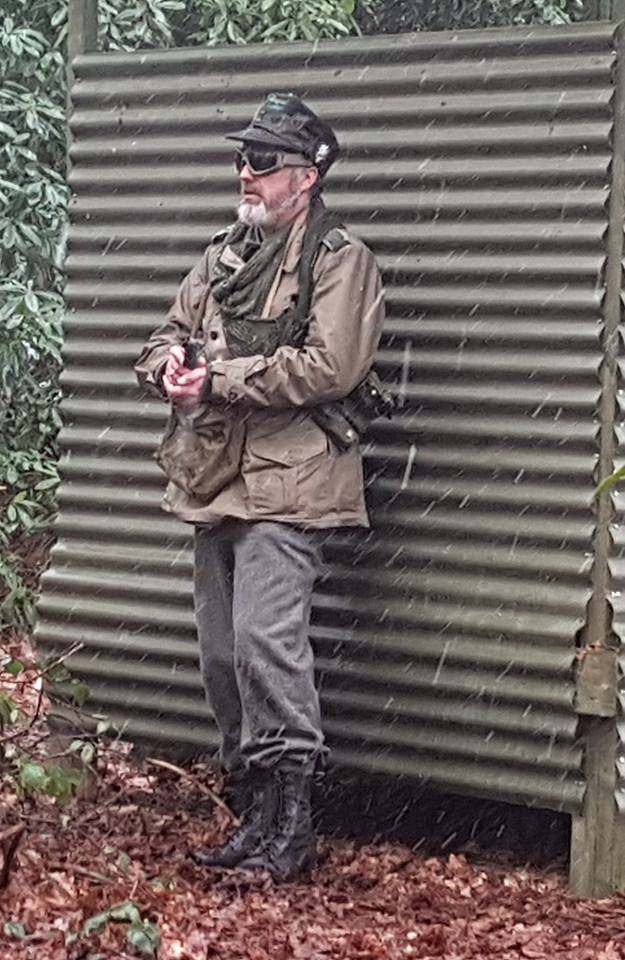 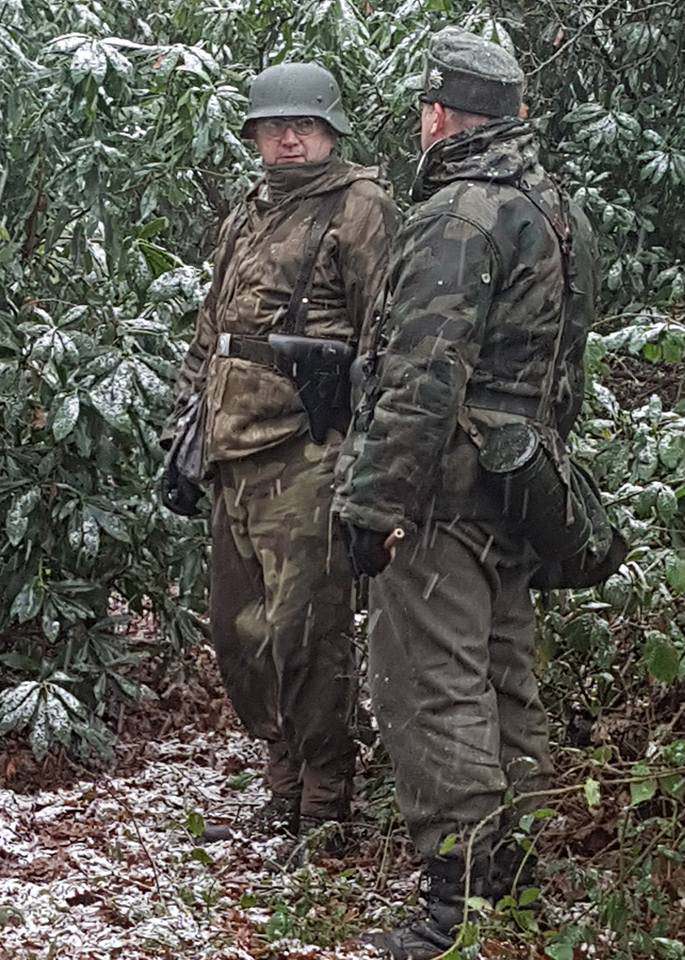 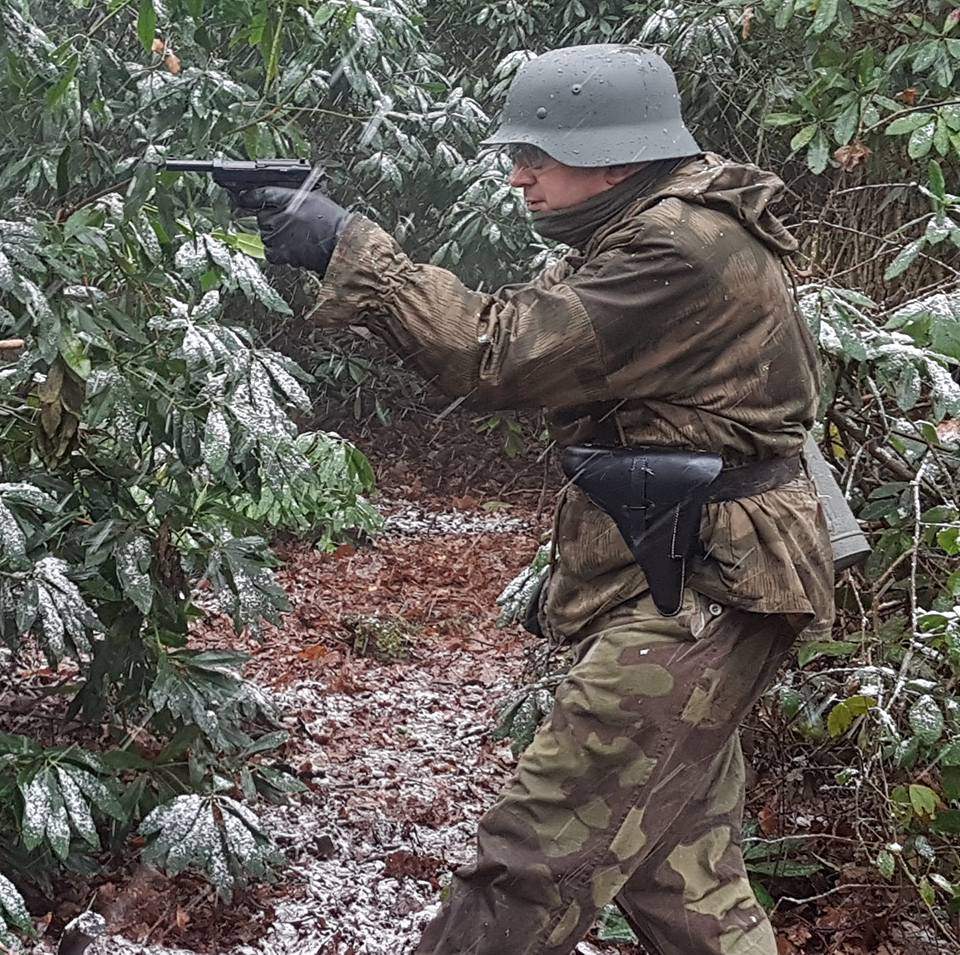 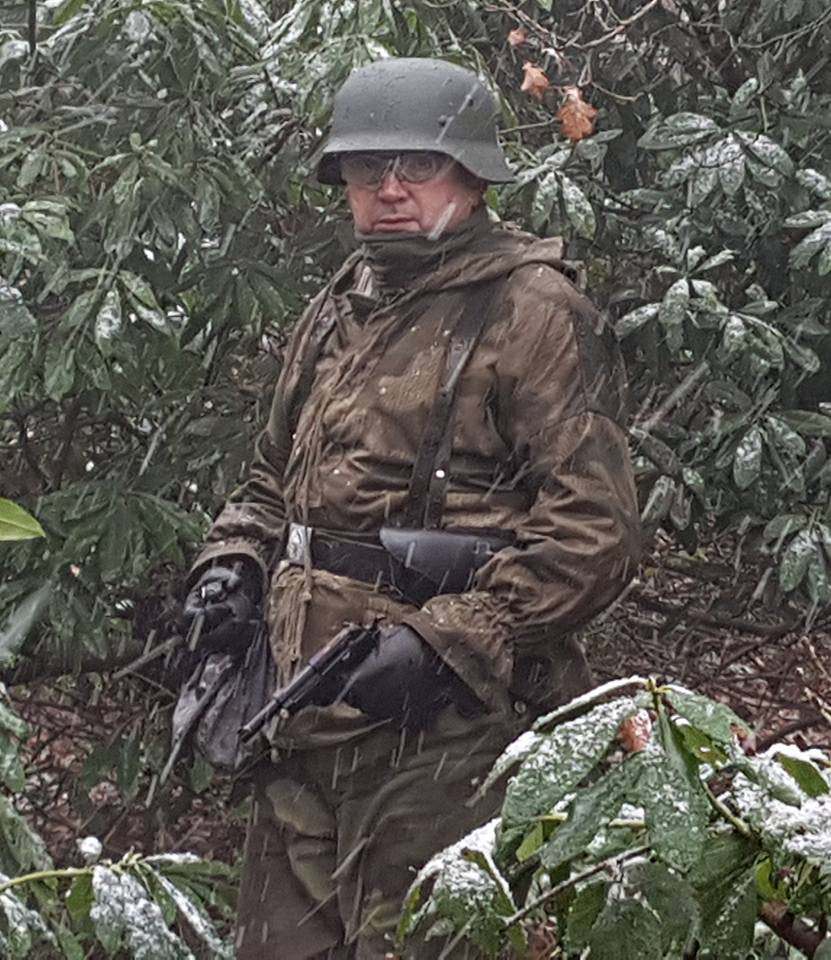 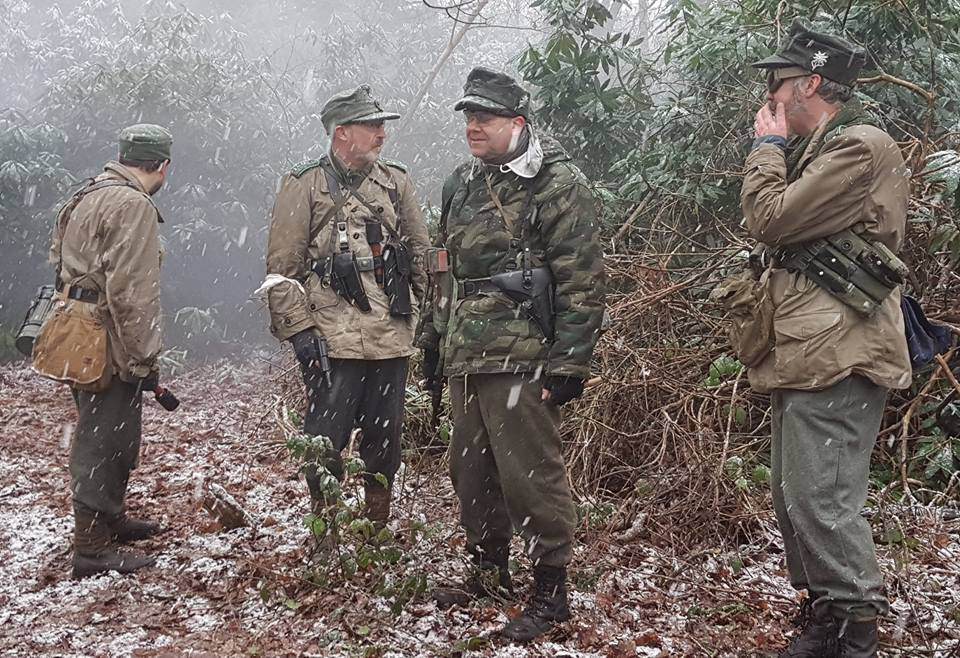 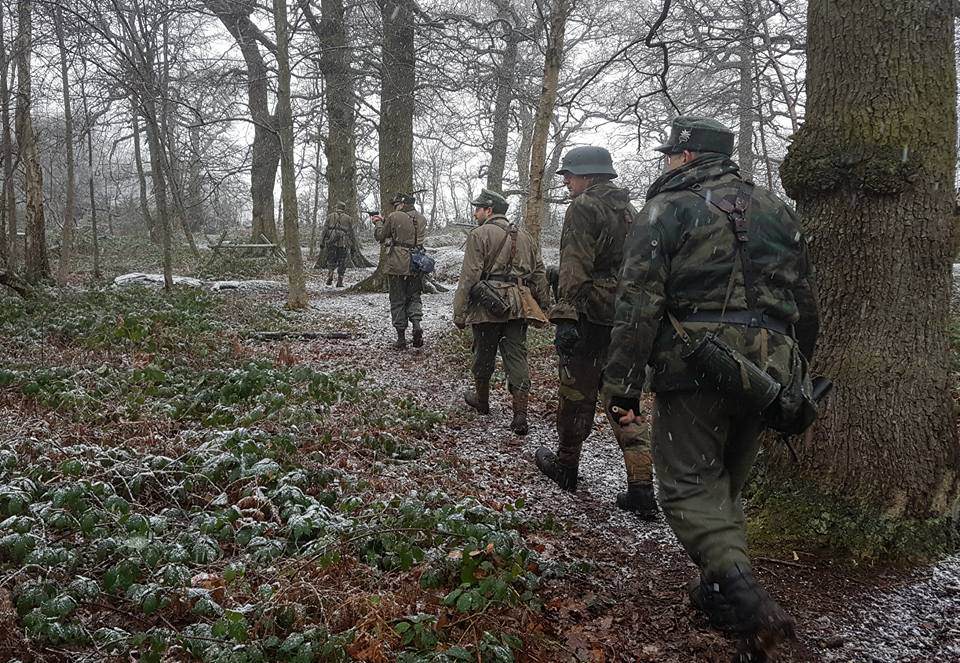 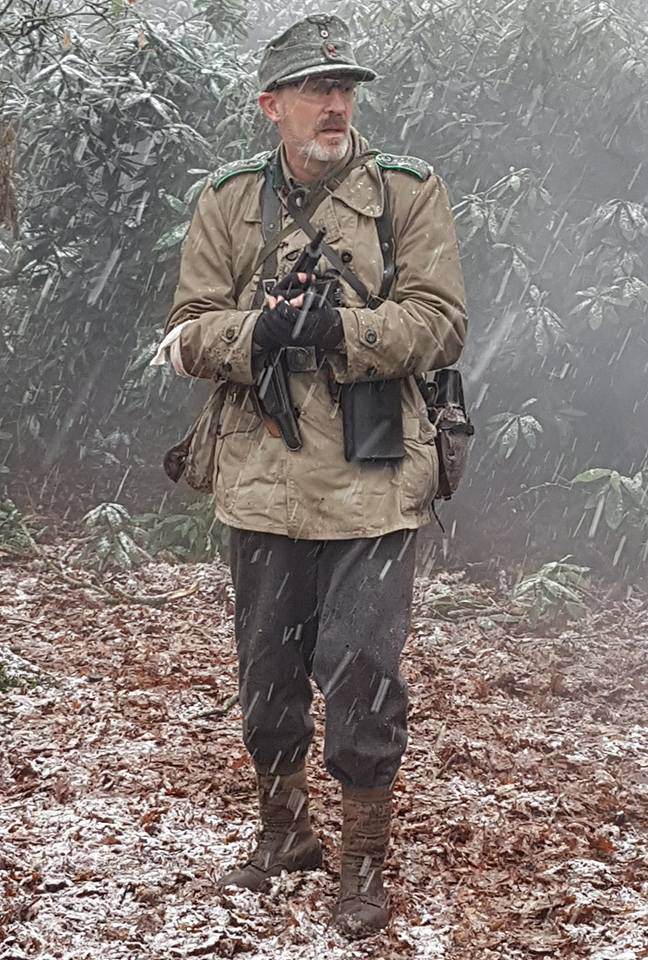 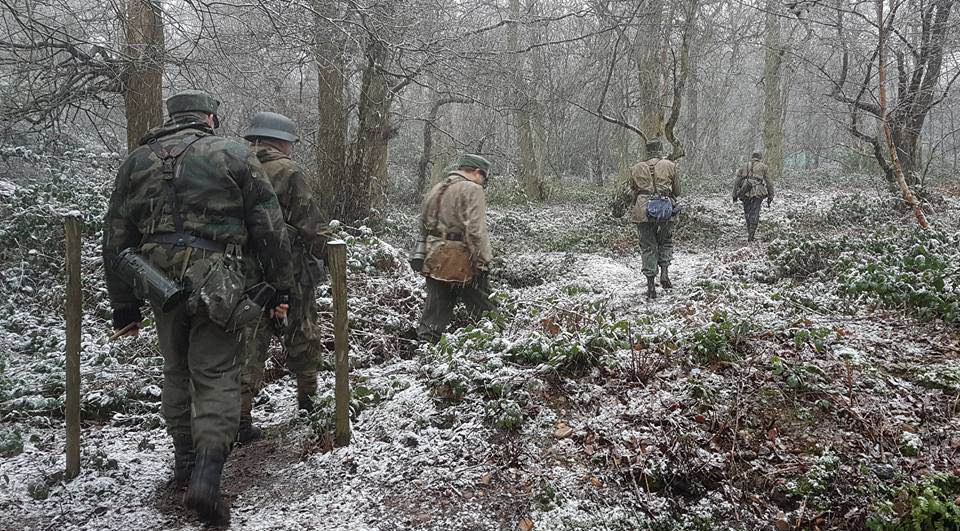 Wanted to say thanks to all the organisers for putting on a great game. Really like the small missions and some real thought was put into them. Thanks to zug 4 for all their efforts in the day we had a great time. Thought I would bring out the snow smock for an outing as I was promised freezing cold and dry. There were a few raised eyebrows as everyone else was sporting camo. Well that soon changed when it started to chuck it down with snow I was the one now blending in with the background and they were silhouetted against the white.

Sorry we all started wimp out just before the final push most were wet and cold by then but it did not detract in anyway from the great day we had.

Thanks Martin for the ribbon

Great way to start the new year! Big, big thanks to Chris and Co for putting on yet another really great event; the level of detail that went into the props and the missions was outstanding, as was the overall gameplan and gameplay.

Thanks to Martin and the rest of Zug 1; I'd like to think that as Gebirgsjäger we came into our element in the inclement weather, though that was just wishful thinking on my part!

Really good squad play from everyone and no moans were heard.

Many thanks to Chris for all the time, effort and thought he puts into these games, and to the rest of the fireball crew, and to all the other players, to make the usual high standard of game. The elite Gebirgsjäger were in their element in the snow, especially Martin with the amount of pistol kills he got, is there a sniper award for pistols

What a fantastic day, which was made even more special with a dusting of snow for some extra atmosphere!!

Thank to Chris for the usual high standard of missions, props and extra thought and effort that you put in to every detail to make these events so good.

Will get the photos done ASAP and posted up to my facebook page: 'The Airsoft Project', so make sure you keep checking over then next few days.

Photos are now up:

Please like the page and like/tag/share images as you see fit.