I found a thread under Axis, about what to wear under pea/cammo, including cut-down wool tunics. Of course most European armies had lightweight Summer tunics/trousers, in cotton drill.

Even the BEF had denim overall blouses with air holes. For generic portrayals in Summer weather, what's the view, regarding the denims, instead of wool serge ?

Yes, many players have denims and they are worn in games. However for the Med scenarios KD is worn as was well as wool BD for British and Allied players. Check the pictures in the Crete game thread.

I found a thread under Axis, about what to wear under pea/cammo, including cut-down wool tunics. Of course most European armies had lightweight Summer tunics/trousers, in cotton drill.

Even the BEF had denim overall blouses with air holes. For generic portrayals in Summer weather, what's the view, regarding the denims, instead of wool serge ?

I think to be honest you're getting a bit of a false impression here.

In the european theatre most soldiers wore wool, day in day out, even in summer.

The man of the 1930s was used to wearing wool clothes and wearing your sleeves rolled up was positively casual.

Put it this way in quite a warm september of 44 british airborne dropped in to arnhem wearing string vest, wool shirts, battle dress and a denison on top with a jumper in their pack in case it got chilly. Why?

Because most soldiers lived and slept in their uniforms, if they were lucky they had a blanket, zelt or groundsheet to throw over themselves.

The peadot uniform is an over suit, supposed to be worn over wool. It's better to be warm in the day than freezing to death at night.

Likewise the HBT uniforms and denims are 'work wear' and were occasionally worn over the wools (with regards to denims) in cold weather. There are *very* few accounts of soldiers fighting in Europe in their denims, where would you put your BD? Quite often soldiers didnt see their unit transport (with their large pack and all their other kit) for weeks when at war.

In the med you'll see a big mix of KD/denim/wool but not so in Europe. I can think of a handful of pics of men 'in combat' (and most of these are engineers digging fotifications) wearing denims in the field without their BD.

If you're hot take your BD blouse off or roll up the sleeves, its what they did. Look at pictures of German infantry in the baking hot russian summer... they have unbuttoned wool tunics rolled up to the elbow and their trousers *outside* their jackboots to aid air flow.

Waffen SS troops are occasionally seen wearing the smock over their undershirt or even just the smock on their own.

Like Gadge said, for most troops, denim was workwear/overalls. The British denims were meant to be worn over the BD (just watch the scene in 'The Way Ahead' where our heroes are peeling spuds). As Ramsay said, in the Med and Far East etc people wore lighter weight clothing, during the day anyway (the desert gets very, very cold at night, the Malayan jungle doesn't).

In places with extreme temperatures (e.g. central Russia in summer) then yes, they might wear cotton if they were issued (as they were to the Red Army), but in temperate western europe, the temperature extremes are far less. Yes it can get a bit warm in August and slightly chilly in January, but it isn't Siberia.

For game purposes, obviously wear denims if you want, but really we are only out and about for a few hours and have access to a lot more fresh water and carry a lot less around than than our forebears. Last summer was freezing cold and pelting with rain most of the time, and I was very glad of my wools! Plenty of people pitch up to games in cotton though, for a variety of reasons.

Rare in Europe? Denims are all over the place in the pics of Falaise campaign. And mechanized/motorized units had a fairly easy access to their troop carriers.

Ok, look at pics and you'll be struggling to find one pic of guys in denims for every 50 or so of guys in serge.

Denim? Falaise? Tricky, my answer is yes its in lots of photos of British and Commonwealth troops, but not many of combat troops.
The images where denims show up are almost, but not quite always, of second line and support troops. There to clean up or examine or recover the wrecked and disabled Axis vehicles or to remove and dispose of the bodies, human and animal, that littered the roads and tracks in the pocket.
That is just the kind of duty denims were designed and specified for. 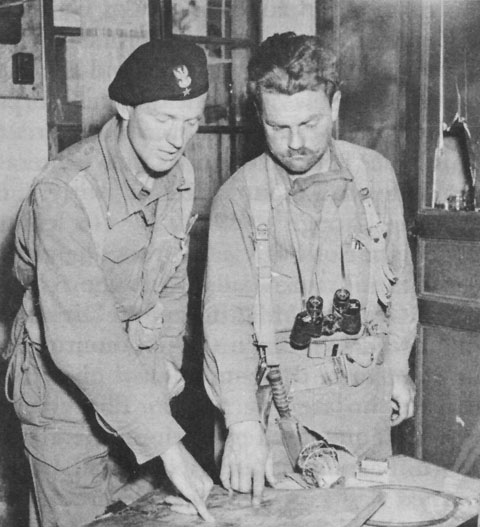 It is all very easy for those tanker chappies to have a change of clothes, they don't have to carry them like infantrymen do

Especially tank and armoured car troops. Denims either two piece or overalls were almost standard wear.
Second pic has some interesting mods to the denims or is it an overall?
Either way they are not infantry in denims.

Either way they are not infantry in denims.

Sorry, 10th Dragoons were not infantry? What were they then?

My mistake, motorised Infantry they were.

I think officially they were 'mounted infantry', perhaps Mechanised Infantry?.. Were they in Half Tracks or Trucks?

The Black Beret can be confusing as it is associated/normally worn by armoured troops. 10th Dragoons were Infantry however.

I agree with both sides. Normally, yes, wool was worn - it being preferable to sweat in the day than freeze at night - but, as I have been through a lot of pics of Falaise I see that the Polish troops took to wearing Denims, the Canadians look to favour Shirt sleeves.

Photos are hard to come by but I read and heard the Poles fighting on Maczuga (the Mace) were almost all doing so in Denims. The later push to Chambois was pretty similar. In the rare pictures you can see a good mix of wool and denim. Not jeep drivers and not rear echelon troops at all. Mechanized and motorized infantry was usually close enough to their transports to be able to switch kit as appropriate.

But wearing wool in summer is a completely different point. I've been a re-enactor for some 15 years now, I've worn multiple layers of wool in 30deg heat and done so comfortably. If you know how wool works (and don't make a mistake of mixing cotton and wool) it is really comfortable. Roman legions wore wool tunics and cloaks in Egypt.

It's still different for Poles.
You cannot apply what the Polish wore as a standard for British and Commonwealth troops.
The 2nd Lt in the bottom picture is deffo not wearing standard denims. Its either an overall or modified trousers, either way not issue for British Infantry.

You need them in the desert, it gets bloody cold. Plus they had bare knees and things, aids the cooling process, ask a Scot.
Greatcoats were common evening and night wear in the desert campaigns for most armies.

Deffo, having been in North Africa in february it was freezing at night.

And yeah, thats why you dont wear undies with kilts... hot enough with all that wool wrapped round you as is.

Perhaps rare is a bit strong a term. Very uncommon for sure though.

As said the majority of infantry units could be seperated from their blankets and greatcoats on unit transport for some time and you needed the wool in the evenings. It does seem to be second line troops wearing denims on the whole with a few (noted) exceptions.

The only real exception i can think of is mid war commando raiding units who often wore denim or wool (to personal prefernece) or mixed the two but favoured denims on raids like dieppe as they knew they could get very wet and it was supposed to be a short duration raid... they didnt expect to have to live in the stuff for weeks but it was preferable to wool for shedding off the water.

Italy i'll grant you denims were used by frontline inf quite a lot but i still think its 'untypical' to say the least to wear denims for a NWE infantry impression. depending on your desired accuracy you'd probably be best served picking a unit with a lot of pictorial evidence of it being done. For example we used to portray the Hallamshire battalion, i've seen hundreds of pics of them in Normandy and read most of the war diaries and cant recall a reference to fighting in denims or seeing a pic of it so it wouldnt be appropriate, we only wore them at events when doing 'dirty work' like stripping and cleaning the vickers.

If you're doing your polish dragoon unit its probably the right choice if you've the pics to back it up but for the OP, i'll stick to my initial view that wool was really the way to go