Forums
U.S. FORCES
US Uniforms and Kit
References for US L...

[Sticky] References for US Loadouts

Want to know what is worn by who, how and where? Need inspiration???

Here's a list of useful books and web links...

HeadShot edit: We'll also add any useful post about kit to this thread for future reference and safe keeping.

and a couple of sites sites;

OK, here are some links:

And you can't go far wrong by getting these books:

hope above can help

hope this will help some guys out

A good photographic book on what's worn by who is:

I have a copy of - U.S. Army Uniforms of World War II (Paperback) by Shelby L. Stanton

I've got an old hardback of that book Del, it's superb and references lots of R&D of the uniforms too.

This is also a cracker: 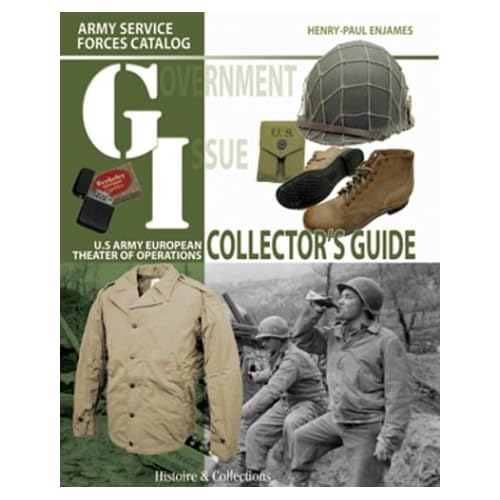 The GI's Collector's Guide is the Bible for US Living Historians/Re-enactors/Collectors.
Ken Lewis who wrote "from Doughboy to GI" has been selling stuff to Enjames for a new edition
of the Guide.

Doughboy to GI has more and better descriptions of items, but photo's aren't always very clear.

I wanted my first contribution to this forum to be a good one so here it is. I have been wanting to create a conclusive online Pictoral reference of the peices of Web Gear that the United States Marine would have been issued in WW2.

I have been collecting for some time now and feel that my collection is now large enough to start catalouging and posting pictures of it.

This is a work in progress and still has a very long way to go. My ultimate goal is to obtain at least one example of every type/ style of web gear and other items that were used by the USMC in WW2.

As of now this collection mostly represents the peices of gear that would have been used and seen in 1942 through mid 1943 ( with some exceptions) as this time period is what my main focus on USMC gear is concerned with. Not everything I own has been photographed yet.

The next installment of my USMC Web gear and Items reference will include all versions of canteens used and equipment seen from late 1943 - 1945.

I will also post in the future pictures of complete web gear sets, that is to say the gear assembled on a person.

All items are WW1 or WW2 originals unless noted otherwise.

Here is a picture of the 1st contract BOYT made upperpacks marking. It is characterized as a 1st contract pack becuase this type of manufacture marking was only used on the 1st contract placed by the USMC with BOYT. All other contracts markings followed the next pictures style.

This picture shows the makers marking employed after the 1st contract of P-41 packs from BOYT. This marking woudl stay the same through the rest of the war.

This is a picture of 3 Depot made lower packs and one 42 dated 1st Contract BOYT lower pack (the one at the end) Note the varying shades of canvas and webbing used on each of the Depot made packs and slight size/ shape variation in the packs themselves.

This is a picture of a complete Issued as such Depot made pack Both the lower and upper parts have matching stains and wear (where the two packs meet) indicating that these were issued together.

Here is a picture of the items that would typically go onto a P-41 pack, a bayonet scabbard, shovel, and shelter half with blanket rolled up inside. The only reproduction item in this picture is the M1910 scabbard. Early in the War the USMC used WW1 Army issue and WW2 army issued shelter halves (seen above the pack)

Here is a picture of the P-41 pack fully assembled. This type of equipment set up woudl have been typical for a Marine from 42-mid to late 43. The use of the Khaki shelter half, and M1910 Bayonet scabbard is well documented into 42-43.

Here is a pack set up typical of a soldier seen from mid to late 43 all the way until the end of the war ( use of M43 shovel as well as M1910 though) Depot made packs were far less common and BOYT packs were the norm. The cammo shelter half was introduced in 1943 and became standard issue. The shelter half, shovel and shovel cover are reproductions.

Here we see three P-41 suspenders, each oen is very different from the other and represents two distinct versions used during the war. As can be seen color variation in the Suspenders was quite high, ranging from mustard yellow to a combination of khaki and olive drab.

In this picture we see two version of suspenders, a first pattern with an early flat buckle (top) and a second pattern with a curved buckle (bottom) They were never reffered too as 1st or 2nd pattern but for clarifications sake I refer to them as such. When the P41 suspender was made for a short time the buckles were flat and then they put curved ones on.

The USMC made good use of the M36 suspender fromt he army, there is plentiful documentation of them being used from Guadalcannal to Okinawa.

Here are three types of banodliers used by the USMC. Early on and on a limited use the USMC used the WW1 army grenade vest for a number of things. WW1 BAR bandoliers were also used extensivly as well as the Springfield (pictured) and Garand ammo bandoliers.

Here we have three different versions of WW1 WW2 Depot Modified BAR belts made specifically by the USMC depot becuase of a lack of WW2 M37 BAR belts. Each one shows a different combonation of pouch flats and hardware. There also is a WW1 M1910 ammo belt pictured that was used extensuvly by the USMC as well as a 43 dated M1923 USMC made ammo belt above that.

Here we see a WW1 carslie tin, sulfie pack and needle tin as would have been issued WW1 surplus.

Here is the very common WW2 carlise tin and latter cardboard bandage box, these two were issued in the greatest numbers.

Here is the Army Jungle first aid kit with some of its original contents specific to this kit. These were used from late 43-45 along with all the other first aid kits.

From the left we have a 42 dated BOYT made leather machete sheath, a M1910 Bayonet scabbard (repro) and Two M1910 shovels with USMC shovel covers ( the one of the far right is a reproduction as well as the US one too) We also have a Navy Mk2 Ka-BAR ( these did make there way onto the battle field) and also the trench knife (repro) The shovels are repainted originals.

This is a mid war made P-41 jacket, the buttons are the harder to find steel/ Zinc made buttons. It also has a deep sage green typical of mid war Jackets.

This is a late war jacket, the buttons are copper ( most widely used throught the war) and it is a light sage green ( though heavly worn) it also has its bottom pockets missing, something found on many jackets as were commonly taken off sometimes.

Here is a repro P-42 uniform, inroduced in 43 it was not the greatest of success and lead to the development of the P-44 uniform.

Even though the P-44 never saw service in WW2 I still wanted to include it. Neat example as the Marine put on lower pockets after getting it issued to him.

The M41 was issued to the USMC in 44 and saw use from Iwo Ima to Okinawa. This is a reproduction.

Each helmet is an original WW2 front seam fixed bale helmet. The Cammo cover was not issued unitil 43 but was used extensivly.

WW2 EGA on WW2 Army cap, this was common practice as the USMC was givin army caps, this example was givin to me by a Vet from the 4th Marine Radiers along with his tie.

I dont need to go into this but each one was used in one version or another during WW2 by the USMC.

Bags and Pack Board

The USMC used the M3A1 gs mask bag when they got them in 44 as a GP bag for everything. They also very early on contracted a few army pattern M36 musset bags, this is a very beaten example of one of the few that were contracted.

The Yukon Pack board as it came to be known was used by the military in WW2 before the latter plywood one we all know came to be. This is a great 43 dated example in mint condition. When the USMC used pack boards then they would have used this one early on becuase this was what was available.

Next installment will fill in the holes I have here, but its a great start for anyone wanting to see actuall USMC equipment and learn a bit about it.

A Nice big overall pics of part of my collection.

Whilst looking for info on U.S leggings/gaiters, I came across this http://www.sproe.com/index.html . I know a lot of the film is utter twaddle but there's a good a-z directory with lots of other useful info in it.

A Photographic Journey of the US Third Division in WWII

Lots of Photos from Anzio to Austria Via Southern France. Click the name of the 'theatre/campaign' and away you go.