It would make more sense to me if the didn't use it at all - they would be uniform, smart, and if they don't care for it they don;t care for it.

That makes no sense to be though, they would be rag-tag and shitty...

Memoirs tend to focus on other tales than blanco...

Exactamon. Hence the reason for my whole website - Blanco, dubbin and boot polish were such mundane, workaday part of a soldiers life that hardly a reference is made to it and 70 years on has a mystery of its own. Same for tooth brushes, underwear and socks (et al) I suppose. Not that they are mysterious, but why write about them contemporaneously.

The parade kit would be whitened, either by blanco or toothpaste. The soldiers would swap uniform parts to try and match the colour. The mismatched gear and the blanco/no blanco/different colours thing is about the battle gear, not parade gear.

That makes no sense to be(me?) though

Sorry, the army wasnt think of your sensibilities?

Blanco was a British Army thing.
The Polish Armies are not the British Army. They got our kit but not our traditions.
The Canadians didnt have Blanco as a compulsory part of their regime. Nor did all the Free French we equipped.
ANZACs?

Partly the thread I linked already, partly exchange of information with Polish re-enactment groups (I feel weird writing it, "re-enactment" is currently a dirty word in Poland), partly excerpts from "Polskie siÅ‚y zbrojne na Zachodzie 1939-1947". Just have a look at these uniforms:

No blanco was normal for Italy even with the blanco mad brits. 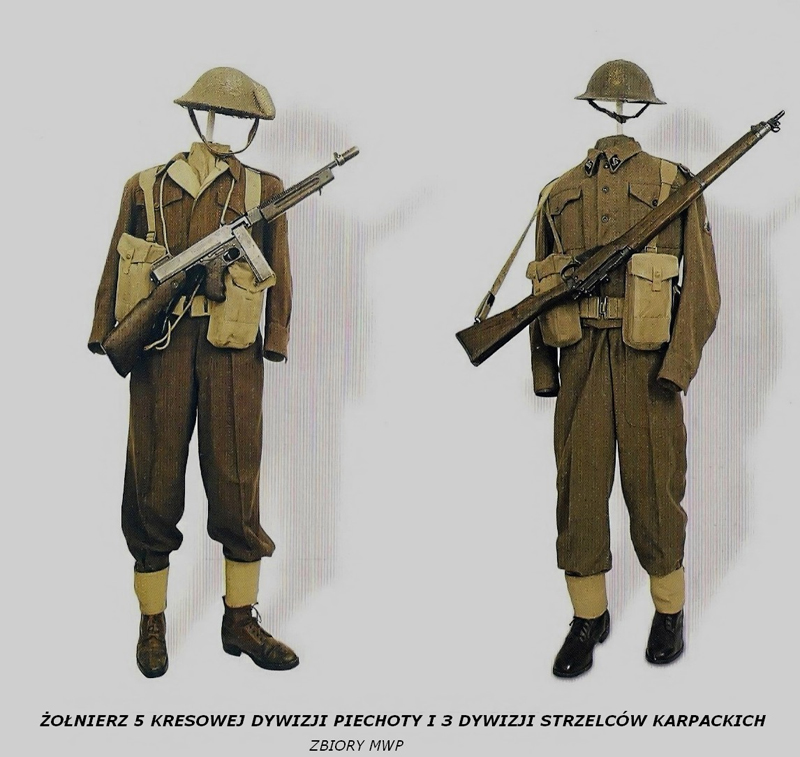 And if you feel like it just browse pics on the net. You will see a lot of different shades of webbing. One additional complication is that while unblancoed webbing was initially light (pretty much like parts of the uniform of the Grand Master of camouflage, ambush and infiltration, the Imperial Japanese private) after a while it would become dirty and stained, the colour of environment the soldier found himself in. On B&W pics webbing that may seem blancoed may have simply achieved the "dirty veteran" status

actually all those units were in Italy

(except the SBS, obviously)

However I have been collecting every picture of Polish forces I can find in Britain, France, Belgium Germany so I can analyse them all.

they are at work though.

Just have a look at these uniforms:

These are all photos of museum displays. Museum displays are hardly ever of the exact complete kit as used by one particular person - and even in British museums with displays of British uniforms and equipment, there is commonly quite a few errors, especially with webbing and Blanco, to nearly every display.

A good example; Duxford is part of the IWM, so they should be quiet 'keyed up' on the whole British army thing for setting out a display, yet when I visited a short while ago, nearly every single mannequin and cabinet display of British Army personnel, had either all completely un-Blanco'd webbing or a miss-match of worn and un-Blanco'd items: Ok, all right, I give up

Sorry, guys, I cannot show you the complete total collection of all the webbing sets used by all the Polish troops ever in their perfect condition as seen in 1944 and I cannot actually prove that uniforms and webbing sets in state and private collections are not fake. For myself I've seen quite enough pictures and find the multiple sources telling me the same thing to be fairly believable. If you believe Poles followed exactly the same rules that Brits did let's just agree to disagree.

What is left for me to do is researching differences between the use (or lack of it) of blanco in 1SBS and 1DP. I still have some books about them in my to-read list.

Sorry, the army wasnt think of your sensibilities?

Blanco was a British Army thing.
The Polish Armies are not the British Army. They got our kit but not our traditions.
The Canadians didnt have Blanco as a compulsory part of their regime. Nor did all the Free French we equipped.
ANZACs?

To counter the 'no one else did it' argument; did not the Canadians have a fine tradition of British Army uniforms and accoutrements from Slade Wallace-type up? Did not the manufacturer of canvas webbing specify the use of a cleaner and renovator from the get-go? Did not the Canadians and Australians have web cleaning products available from an early stage? If the Polish army were adverse to Blanco why whiten their webbing - any fule do no that they were famed for using expensive toothpaste rather than a cheap whitening block loved by cricketers and tennis players for the past 50 years. A tradition only foiled in the 1960's when a large consignment of Signal toothpaste (a suitably military brand it was thought) was issued to troops who found the resultant effect was pink webbing. Some found with care that the smart red/white stripe effect could be retained by scraping it on rather than scrubbing. (Wiki reference: [link]http://en.wikipedia.org/wiki/Bullshit[/link]

Derby museum has been the latest to fall under my scrutiny

didnt have Blanco as a compulsory part of their regime.

I think my post still stands, the qualifier 'compulsory' sees to that?
Yes Canada did have web cleaning products, you know I own some, my blanco is all over your web site, still the application of blanco to webbing was not always practiced by the largely volunteer Canadian troops. When they shipped over some did, some didn't. By wars end whilst I can't give you figures almost all did.
Just because they adopted some of the styling of British uniforms and equipment doesn't infer that they took all of them. The Canadian basic pouch kept the ballistite loops, their BD never had an economy model, their boots were different, they wore their jump wings in a different location and their anklets deeper/taller. A short list of many differences. You can safely add 'didn't always use blanco' to it.

To counter the 'no one else did it' argument;

Why? No-one is making it, some did, some didn't. Why joust at strawmen?

I personally have always been afraid of blanco... my P37 set is basically unissued and I really like the beautiful golden khaki color.

there is no definitive evidence, otherwise I would be using less circumspect words like 'suggests' and 'the evidence' and more direct words such as 'they did'.

Here's some from NWE between 1944 and 1945. Trying to find pictures that are in the field, of Polish infantry, and clearly show webbing is very hard. There are some in books that are not on the internet.

A pic in parade-y smartness. Webbing shades looks to vary amongst the small group, of course this could be some trick of the light, or else different levels of worn-out blanco.
-- attachment is not available --

A selection of belts worn for a visiting Monty, either 43 or 44. A variable colour of belts can be seen, again, it could be a lighting issue.
-- attachment is not available --

Polish Infantry, near Chambois, France, 1944. A picture that is not very clear but the third man back has webbing which stands out looking to be unblancoed. 10th Dragoons (infantry) on parade, 1943. I am normally more distrustful of coloured photographs, as some can be 'coloured in afterwards'

A selection of pics of Jan Pirog from the war. He is a tanker, so not directly applicable evidence for infantry, but there is, again, a lot of different shaded belts that can be seen, which is suggestive of the manner in which Polish units approached the use of blanco.
http://www.janpirog.com/war_pics.php

I will try and see about scanning some pics from books in too.

I think the issue is compounded by the fact that unblancoed webbing comes in various shades depending on country of manufacture and factory. Not massively so but i've got unissued and 'raw' pieces that are of different shades, notably so.

You might see this in 'unblancoed' photos. i've got an oft trotted out pic of 1RTRs officers in germany on a parade period annotated as 'look no blanco' and the belts are different shades on some guys but this might be a case of different degrees of success in washing them clean from previous applications.

I've also got pics of groups of british staff officers from various formations at a conference and belts are notably different colours. I think once you start looking at officers in pics you further open up the variety as nobody is going to tell the brigadier his belt needs redoing at his own o group

And i'd agree with museums being a poor substitute for books. Especially the larger ones as quite often you've got 'multi period' and the curator may not care so much about certain eras. Nottingham castle museum has some shockingly wrong stuff in it from WWII onwards (i seem to recall their 'wwii' tommy has one popper closure pouch and one QRF tabbed one among other minor quibbles.) Equally when PBI went to the Staffordshire regiments museum they have manequins done up in mismatched and post war webbing.

regardless of whether its appropriate to the unit or not...mismatched webbing looks rubbish

But like 'cap GS' sometimes looking rubbish is all part of looking 'accurate' i guess.

A pic in parade-y smartness. Webbing shades looks to vary amongst the small group, of course this could be some trick of the light, or else different levels of worn-out blanco.

These are 1st Armoured soldiers, yet they seem to have para helmets? ...

A pic in parade-y smartness. Webbing shades looks to vary amongst the small group, of course this could be some trick of the light, or else different levels of worn-out blanco.

These are 1st Armoured soldiers, yet they seem to have para helmets? ...

They are Armoured helmets, or at least I assume so.

But they seem to be 10th Dragoons. Mech infantry, not tankers... Did mech infantry wear AFV helmets?

[edit]
All right, I've talked to my friends who are more into the 1st Armoured. Apparently the entire division switched to AFV helmets after the war (they were mixed towards the end of the war). This may very well be a post-war pic.